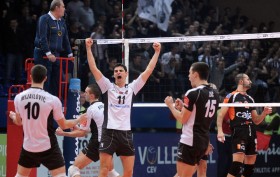 The atmosphere was just great tonight at “Sumice” sports hall with all fans dressed in black and white to support the home guys on their quest for a first win in Pool C. Partizan started well setting the tempo at both mandatory stops (8:6, 16:10) and after the second technical time-out the home guys played even better, especially with the help of their opposite Aleksandar Minic.

The head coach of CAI TERUEL, Oscar Novillo, made some changes but it did not work, as Partizan scored with great efficiency in attack (79%) and no errors at all.

CAI TERUEL got back on track in set 2 (7:8, 14:16) and the guests drew level anchored by Miguel Martinez Sugranes.

Partizan played with good tempo in the third set, with more consistency in reception, so setter Aleksa Brdjovic got the chance to go for different combinations in attack. After going for the provisional 2:1, Partizan had already claimed its first point in the competition.

CAI TERUEL paced the game in set 4 (6:8, 10:16, 10:20) and even though Serbian coach Milan Djuricic tried to stop their march via some substitutions, still the Spaniards could call for the tie-break. Partizan played with glowing hearts in the deciding set and eventually could score a memorable win to claim also some valuable points to remain in contention for third place in the group.

Minic top scored for the home side with 30 points, well supported by Nikola Mijailovic with 20 and Marko Nikolic with 12.

“We went for an all or nothing mission in the fifth set after missing our chance in set 4. Tactically we were well prepared to play this rival” says Serbian mentor Milan Djuricic.

“They played better in attack and reception and we did not have any solution to stop their opposite Minic” stresses Spanish mentor Novillo.