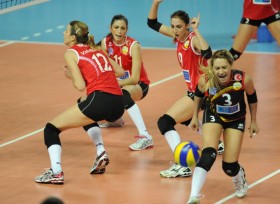 Azerrail caught a great start (3:8) but Vakifbank fought back to draw level at 11. The remainder of the set unfolded as a great battle that eventually ended in favor of the guests from Azerbaijan with Polina Rahimova scoring 9 points all alone.

Vakifbank, the reigning champions from the past edition of the CEV Volleyball Champions League, stormed out to a great 8:0 lead in the second set and dominated the game all the way through; although Azerrail coach Faig Garayev opted for some of his back-up players, still Vakifbank did not stop its march for the final 25-14.

The score stayed balanced in set 3 up to 19 all, before Bahar Toksoy scored the next two for the home side; Azerrail leveled again at 23 but an error of Rahimova handed over the set to the hosts (25-23).

Vakifbank set the pace also in the fourth set (11:8) but Garayev got his side back on track after asking a time-out; ISTANBUL tried to claw back but Azerrail called for the tie-break. The guests got a provisional leadership in the deciding set (3:5) but Vakifbank was already up as teams changed sides (8:7). Azerrail turned the score around (8:11) but Jelena Nikolic helped her side move to the front (13:12); after a time-out asked by Garayev, Rahimova failed to score and another error, this time of Oksana Parkhomenko, put an end to the fight (15-12) for the joy of the home fans.

Rahimova top scored in the match with 24 points.

“We had many problems in reception today and it was not easy to find a way through the block of Vakifbank. They have got very experienced players and we eventually lost the match” states Azerrail captain Parkhomenko.

“Our block and defense worked well tonight; we managed to stop Rahimova but we still have many problems to deal with for the remainder of the season. Our team is not that talented but we have a great fighting spirit and with this we can will all games” says home head coach Giovanni Guidetti.

“I can say that Vakifbank is back after this game. If we play like we did tonight, we can defeat any team in the world” proudly states captain Gözde Kirdar Sonsirma.