Schwerin, Germany, December 20, 2011. Although they fought with glowing hearts and delivered a tremendous effort, the local heroines of SCHWERINER SC were defeated tonight by title favorite RC CANNES of France 0:3 (21-25, 20-25, 17-25) for the fourth round of play in the League Round of the 2012 CEV Volleyball Champions League – Women (Pool A). 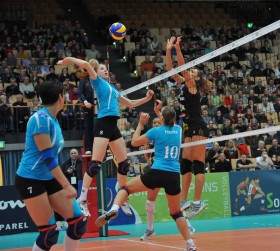 After the clear loss in Cannes, SCHWERINER SC (SSC) showed a different face tonight. Although losing 0:3 the SSC delivered a strong performance against one of the favorites for the title in Europe’s most elitist competition. Both teams started off well, not giving the opponent chances for scoring easy points.

The lead changed back and forth to a 12-12 tie midway through the first set due to very few unforced errors of both teams. After the second technical time-out RC CANNES started to dominate the game, leading by 5 points. However the SSC fought back to a 20:20 tie and getting the crowd excited and its hope up. CANNES then found another gear, forcing the SSC defense to errors that decided the set, 21-25 for RC CANNES.

Patricia Thormann (6 points) for SCHWERINER SC and Serbian Anja Spasojevic for RC CANNES (6 points) were the leading scorers of the first set.

The SSC surprised CANNES at the beginning of set 2. The ladies from Germany were leading quickly 5:1 due to quick plays and strong spikes. The second set was defined by long rallies with the better end for CANNES for most of the times. Therefore the French force came back to tie the game 14:14, winning the big points and consequently the second set 20-25.

Once again Patricia Thormann (6 points) was the leading scorer for the home side. Although down two sets the crowd in Schwerin was electrified by many spectacular rallies and top level Volleyball.

In the third set the SSC again took the lead (3:1) and forced RC CANNES to play its very best Volleyball. After 4 quick points by CANNES due to strong services by Tina Lipicer Samec the SSC was shocked. RC CANNES played power Volleyball with many direct points and forceful services. The SSC did not have an answer to the French offense and so the title favorite from the Cote d’Azur pocketed the final set 17-25.

RC CANNES coach Yan Fang acknowledged the good performance delivered by SCHWERINER SC and said that “we were calmer in decisive situations and therefore we earned the win”.

SSC coach Teun Buijs pointed out that “RC CANNES used their great experience to win the big rallies and therefore the match. We are getting closer to Europe’s top teams though”.

All in all, SCHWERINER SC showed that they are able to match top level teams in sequences but throughout an entire game they are still lacking experience.

Greece: Iraklis and Olympiakos stayed at the top