Strassen, Luxembourg, December 21, 2011. VC STRASSEN wrote history yesterday night in Luxembourg as the national champions from the Grand Duchy edged Italy’s Casa MODENA in the return match scheduled for the second round of the 2012 CEV Volleyball Challenge Cup – Men. 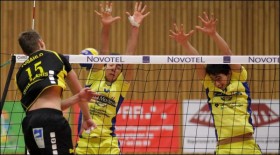 A total of 550 fans were in attendance for what will remain a unique night in the history of the sport for VC STRASSEN and the Luxembourgish Volleyball family.

After claiming the home match in straight sets, the Italian club – winner of 12 trophies in the European Cups – had traveled to Luxembourg only with 8 players.

Their players are mostly from the youth team, but they evidently underestimated the strength of the home side that stepped up in every fundamental to qualify for the next round of the competition and play there Maccabi TEL AVIV of Israel.

VC STRASSEN did not show any fear and rapidly pocketed the opening set (25-15) with the spikes of Karel Kvasnicka.

After trailing 0:3 in set 2, the home guys stormed back and eventually had the upper hand in a breathtaking final rush where STRASSEN needed a total of six set balls to finally wrap it up at 30-28 with a spike of Deivydas Raibikis.

The home fans were standing on their feet as STRASSEN set the pace also in the third set (6:2, 16:12) with Kvasnicka eventually calling for the golden set after sealing the 25-18 that stamped an incredible 3:0 on the scoreboard.

After a break of three minutes, the golden set was played to determine the side advancing to the next round of the competition and VC STRASSEN stretched that great tempo (8:2) to get close to an absolute sensation that eventually turned into reality as the first referee whistled the end of the game by the score of 15-5.