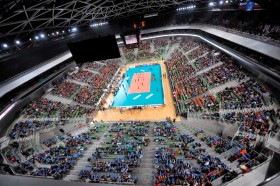 The opening of the match set the tone for what was going to come, a difficult and nerve-racking game.

The home team took the initiative but Poland’s national champions fought back quickly.

The two sides exchanged the lead quite many times and after a final rush full of turnarounds an ace of PGE Skra captain Mariusz Wlazly sealed the final 32-34 for the guests.

In the second set the home guys were able to keep the score close only up to the first mandatory stop (9:10); afterwards Wlazly and his mates pursued their goal with great determination, clipping a margin of six and wrapping it up at 18-25.

PGE Skra dictated the pace of the game also in the third set and changed gear again after the first technical time-out, finally celebrating a well deserved win in straight sets.

“The first set was very tough for both sides and it was evident that the side taking it home would have turned into the pace-setter for set 2” says home coach Igor Kolakovic.

“We were not able to deliver the same performance we had displayed last week in Poland” states ACH Volley captain Andrej Flajs.

“We lacked focus and made too many mistakes”.

“The first set was crucial and its outcome did set the tone for the remainder of the game. This is pretty common in Volleyball” singles out Jacek Nawrocki, the head coach of PGE Skra.