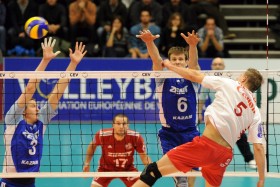 The home guys started well and kept the score tight (7:8) before Zenit clipped a break via the serving turn of Nikolay Apalikov (8:12).
Opposite Robin Overbeeke cut the gap (10:12) and even though Russian head coach Alekno still did not use his stars Maxim Mikhaylov and Reid Priddy, Zenit went up again (12:15).

The reaction of the home side was not late and Overbeeke almost drew the count for Euphony (19:20) before the blocks of Yury Berezhko re-opened the gap (20:23) and Apalikov ended it at 21-25.

ASSE-LENNIK played superbly in the opening of set 2 (5:2, 8:3) and finally Zenit brought Maxim Mikhaylov into the game.

However, this did not change the course of the set with Euphony going up 13:8 and 17:11 to the delight of the home fans that were all standing on their feet.

Eventually it was Westphal that sealed that set for the home side with a great spike to stamp the final 25-19 on the scoreboard.

KAZAN started set 3 by lining up Volkov and Priddy and they immediately made the difference together with Apalikov (0:5, 3:10).

Overbeeke took his side by the hand (7:15) but Zenit was this time merciless and sped up for the provisional 8:20, before a serving error of the Belgians called for the final 12-25.

Euphony forced Zenit into an early time-out in set 4 by the score of 5:2 before Volkov blocked Dirk Westphal for the provisional 6:8.

A series of ties followed before two blocks of Radic and Ramma contributed a margin of two for the home heroes (21:19).

Mikhaylov was back for Cheremisin but Overbeeke was once again stellar and an error of the Russian superstar called for the tie-break.

The tie-break was breathtaking; an ace of Westphal paced Euphony (7:5) with the home crowd going crazy before Mikhaylov got the -1 (10:9) for KAZAN.

Euphony ASSE-LENNIK was again up by 2 (13:11) but Mikhaylov and Volkov contributed the 13 all.

A serving error of Volkov called for a match ball in favor of the hosts but Apalikov drew level.

Overbeeke spiked long for the 14:15 and Mikhaylov – MVP of the World Cup recently completed in Japan – did not miss the chance to finish it off at 14-16. Robin Overbeeke amassed an incredible haul of 28 points for the home side with Westphal (18) and Ramma (13) also finishing in double digits, while Cheremisin paced Zenit tonight with 15.