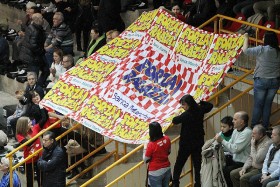 Similarly to what happened last week in Austria, Hypo Tirol started strong and again surprised the Italians especially via the powerful serving of Arvydas Miseikis and a total of 6 blocks; going up 17:9 the guests from Austria were able to resist to the Italian comeback after head coach Giuliani had changed the usual diagonal Travica-Omrcen for the duo Monopoli-van Walle.

The second set was extremely balanced until the very end, with an error of Miseikis contributing the final 25-23 for the hosts.

After that, MACERATA dictated the tempo of the game and wrapped it up pretty easily for the final 3:1.

The home team totally dominated the scene in the third set with the Austrians having evident difficulty to deal with the great serving delivered by Igor Omrcen and Cristian Savani, who was back in action after resting for two weeks because of an injury he had suffered in Japan during the FIVB World Cup.

Hypo Tirol stormed back in set 4 going up 11:4 but the return of Savani changed the rhythm for MACERATA that eventually took the game with the same score as last week in Innsbruck (3:1).

Savani paced the home side with 21 points while Simone Parodi and Dragan Stankovic totaled 17 and 16 respectively; Miseikis top scored for Hypo Tirol with 20.

Home coach Alberto Giuliani was satisfied with the final result: “We did not play our best Volleyball tonight but we needed this victory to confirm our first position in the Pool. We finally scored it and the qualification to the Playoffs 12 is very close now. However, we still have to play two more matches with strong teams such as Lokomotiv NOVOSIBIRSK and Fenerbahce“.