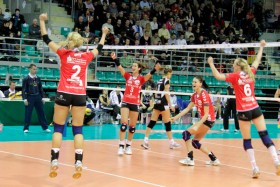 DRESDNER SC got the best start but the home side stormed back powerfully to move up by 3 points after the second technical time-out.

The so-called money time turned into a very close affair with the guests from Germany eventually prevailing at 23-25.

The start of the second set was very balanced but DRESDNER SC changed gear after reaching the 10-point line.

Their setter was able to avoid the home block quite regularly and even though ASPTT MULHOUSE played with glowing hearts, still they had to surrender by the score of 18-25.

The third set confirmed the real supremacy of DRESDNER SC as setter Mareen Apitz was on a class of her own, mastering all attackers with great confidence to seal the final and well deserved 0:3.