Luxembourg, January 9, 2012. The traditional Novotel Cup came to a close yesterday at d’Coque in Luxembourg City with the home teams taking two silver medals to open what is expected to be a very busy season. England took the women’s title for the fifth time in history while the men’s cup went to Scotland. 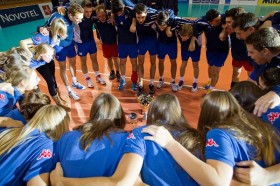 The English ladies celebrated their gold medal already on Sunday morning after they downed their neighbors from Scotland in three straight sets (25-19, 25-12, 25-20).

Head coach Detlef Schönberg used all of his players and after a good opening set, Germany gradually lost momentum while Luxembourg attacked with good consistency also from the back row to win the next three sets and hence finish the tournament in second place.

After Scotland’s men had beaten England 3:2, the result of the last match on schedule starring Denmark and Luxembourg was going to determine the final standings as well as the winner of the 2012 Novotel Cup.

Luxembourg started well but too many mistakes in the so-called money time handed over the opening set to the Danes (23-25).

Denmark played well also in set 2 (19-25) but this team – after losing on Friday in straight sets to Scotland – was anyway no longer in contention for the trophy.

Luxembourg head coach Burkhard Disch opted in set 3 for the starting six that had impressed on Saturday while playing England and with setter Gilles Braas looking inspired, the home team went for the final 25-18.

However, this strength was not showed in set 4 where Denmark had the upper hand, so that the home team had finally to settle for silver with the tournament going to Scotland.

The last day of action was attended by a good crowd and many illustrious guests, including politician Anne Brasseur, the General Manager of the Novotel Luxembourg Kirchberg Eric Laporte and the President of the CEV Small Countries Division, Margaret Ann Fleming.

The “Trophée Denitza Krivova” for the most valuable young player of the tournament was assigned to Nathalie Braas (LUX) while former national players Jeanne Schneider, Patricia Noesen, Lynn Elouardi, Annemarie Lebon and Serge Karier were all honored for their contribution to the sport in the Grand Duchy.