Russia: Vladimir Alekno coach of the year in Russia

Vladimir Alekno is satisfied with 2011 year. “The most important goal - qualifying for the Olympic Games - has been achieved,” said V. Alekno for Russian volleyball federation site. 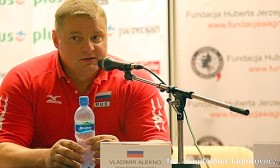 Vladimir Alekno coach of the year in Russia

Russia men’s coach Vladimir Alekno said that despite a disappointing European Championship campaign, his team achieved their main goals in 2011 after they sealed the FIVB Volleyball World League and Men’s World Cup.

Russia finished fourth at the continental tournament but won the World Cup, and with it a spot at the London 2012 Olympic Games, as wildcards in Japan on December 4.

They also held off Brazil in the finals of the World League in Gdansk, Poland to clinch their second crown in the competition.

Now he believes that his team have every chance of claiming gold in London later this year, adding to the three gold medals won by the former Soviet Union in Tokyo 1964, Mexico City 1968 and Moscow 1980.

“They have all the data in order to win a gold medal. The only question is whether they will go the route known to victory as it was in Gdansk and Japan,” he added.

Alekno also took the time to explain his move to take veteran player Roman Yakovlev to the World Cup as part of his backroom staff, saying that his attitude helped calm the players.

“Roman helped to maintain a good atmosphere during the entire, long and very difficult tournament. He has a very specific sense of humor. In a word, a phrase can relieve tension, which after all is not lacking during the two weeks. Besides, I asked whether he wanted to be in the frame, and he said very much.”

Italy: As calm as Boban!