Kazan, Russia, January 11, 2011. Zenit KAZAN extended its invincibility tonight by downing Remat ZALAU of Romania in straight sets (25-21, 25-20, 25-20) and the very last match of Pool B with VfB FRIEDRICHSHAFEN coming up next week will determine the final leader of the group. 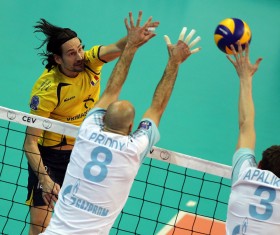 Remat had traveled to Kazan only with 10 players as Brazilian Leonardo Dos Santos was injured and setter Michal Sladecek has left the team.

The hosts – after a very close fight – eventually had the upper hand in the opening set with a series of blocks with Nikolay Apalikov stopping Peter Nagy to seal it at 25-21.

Zenit stormed out to a 7:2 lead in set 2 but Zoltan Mozer and Peter Nagy fired back ZALAU for a tie at 7 all.

The Hungarian players of Remat scored many points but still not enough to cruise past the hosts.

Remat missed the contribution of the middle blockers and Zenit went for the 2:0.

Zenit played easy also in set 3 and eventually clipped the final 3:0 without too much effort.

Peter Nagy of Remat finished the game as top scorer with 20 points while Maxim Mikhaylov totaled 15 for Zenit.

“It is not easy to motivate my players when you play an opponent that is not that strong” says home mentor Vladimir Alekno.

“However, they had to fulfill their task especially as we want to finish first in our Pool and the best starting six will be lined-up for the match with VfB FRIEDRICHSHAFEN”.

“We played against the best team included in the starting field of the Champions League and I asked my boys to play with all of their hearts. In some sections of the game they managed to do this but Zenit is definitely too strong for us” says the head coach of Remat ZALAU, Mariusz Sordyl.

CEV CL: Eczacibasi does not stop the amazing run of RC CANNES