Muszyna, Poland, January 11, 2012. After losing last month in Russia’s capital city, Dinamo MOSCOW took tonight its revenge by beating Bank BPS Fakro MUSZYNA in four sets (25-22, 25-19, 19-25, 25-18) and get the leadership in Pool E waiting for the result of the match coming up tomorrow in Italy with Scavolini PESARO playing Crvena Zvezda BEOGRAD. 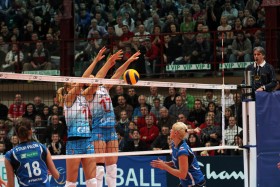 Actually the home side started really well by setting the pace at both mandatory stops (8:5, 16:11) as Angelina Grün, the German star recently signed by Dinamo, was struggling in reception.

The performance of the home girls was encouraging in all fundamentals but things changed after the second technical time-out as Dinamo displayed its class and clipped the set with the score of 25-22.

The guests from Russia dominated the scene also in set 2 (25-19) before MUSZYNA got back on track in set 3 and after initially chasing the rivals, the home heroines went for the 2:1.

Dinamo showed once again its great potential in the fourth set with a mighty 25-15 to wrap it up.

“I think the first set was the crucial moment of the game, after losing there a set we had nearly won we did not recover, also mentally. In my opinion this is quite a common situation in this sport” says home mentor Bogdan Serwinski.

“After a poor start we displayed some good reception and I am delighted with the win. The start was difficult because the sports hall here is really small and the ball moves fast. I think MUSZYNA got the third set mainly via the good serving of Werblinska and Rourke” comments Angelina Grün.