Dresden, Germany, January 15, 2012. One player included in the roster of Germany’s DRESDNER SC will be soon featured on the credit cards provided by Ostsächsischen Sparkasse to its clients. 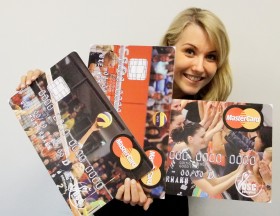 It may be team captain Stefanie Karg or setter Mareen Apitz, or maybe the complete group celebrating with their fans at the end of a game.

This mystery will come to an end only in February as fans will be able to choose their preference for the final layout of such credit cards in combination with the last game to be played by DRESDNER SC in the prelims of the 2012 CEV Volleyball Champions League.

In order to cast their votes all fans can also use the official website and Facebook page of DRESDNER SC especially if they can not attend the match with Turkey’s Fenerbahce Universal ISTANBUL scheduled for Tuesday evening at 7 pm.

Even though Fenerbahce is one of the strongest teams out there and a bronze medalist from last year’s edition, the players around head coach Alexander Waibl look forward to a game in front of a packed arena as they want to make it to the 1/8 finals by finishing third in their Pool.

Many tickets were already sold and the club expects a very exciting atmosphere similarly to the Bundesliga matches with archrivals Rote Raben VILSBIBURG and Smart Allianz STUTTGART.

Some 200 Turkish fans living in Germany will also travel to Dresden to support Fenerbahce providing additional color in the stands.

During a break which is already foreseen for the game the local authorities will honor 18-year old canoe racer Tom Liebscher, a silver medalist from the 2010 Youth Olympic Games in Singapore and a national champion in his age group who is attending the sports gymnasium of Dresden.

Additionally the local sports gymnasium and sports high school will be honored as “elite sports schools of the year 2011”.

This has a special importance also for DRESDNER SC as many of its current and former players are coming out from such educational institutions.

Another promotional action is set to take place on Tuesday with all clients of the above Ostsächsischen Sparkasse getting a reduction of 30% for their tickets (from 9 to just 6 Euros) if they show their personal Sparkasse card.