Turkey: Vakifbank Turk Telekom completed the first round on top 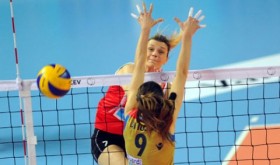 Vakifbank Turk Telekom completed the first round on top

Bosphorus ladies played better in the first part as Bergamo asked for an early time out 6:3, followed by another one at 12:8, however things were not good for Italians, Vakifbank applied a quick finish 25:13 at the end.

All the players in local team contributed well enough in second set 11:8, that means guest team was suffered once again as Vakifbank arrived at second mandatory stop 16:12 and seized set 25:20 easily.

Bergamo set a pace in third set 5:8 and developed a 10:16 via Valentina Diouf, host made some substitutions in order to recover team but Italian giant did not let them go anymore 18:25.

Valentina Diouf was the top scorer with 21 points.

“In first and second sets, we made many simple reception mistakes. Although we played good in third set, our team was so unlucky in last one.” says Italian team coach Davide Mazzanti after the match.

Vakifbank’s head coach Giovanni Guidetti commented match as, “Our opponents are quite weak than we have in Turkish League, that’s why we play better in Champions League. Leadership is important both for psychological and avoid to meet strong teams in play-off.”

Captain Gozde Sonsirma commented, “Due to we are defending champions, we concentrate better such games. That provides us play good in Champions League.”

CEV: Russia back on track for Olympic...