CEV CL M: Asseco Resovia wants to make it to the Playoffs 12 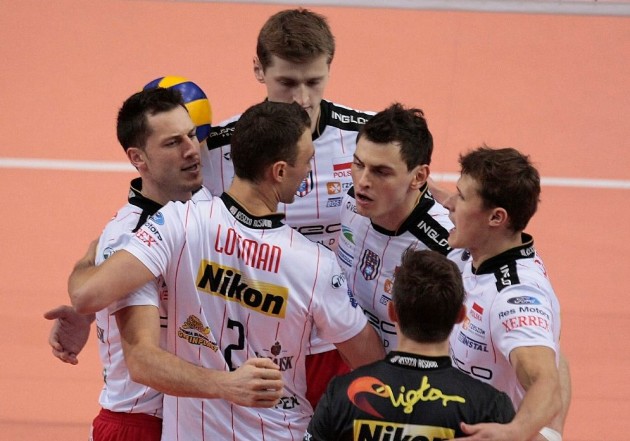 So far Asseco Resovia has had a very irregular season in terms of quality of play. This past weekend the team from RZESZOW lost the prestigious duel against PGE Skra BELCHATOW 0:3 in the national league. At the moment the Polish champions are ranked fifth in the standings with 4 defeats out of 11 games.

In the 2013 CEV Volleyball Champions League Asseco Resovia has claimed 3 games (two times against Remat ZALAU and one with Arago de SETE in France) and lost two matches against Bre Banca Lannutti CUNEO. Before the last leg of the League Round, Asseco Resovia RZESZOW is on the good way to seize the promotion to the Playoffs 12. At the moment there are 5 teams with 9 points after 5 games but only Zaksa KEDZIERZYN-KOZLE has a better set ratio than Asseco Resovia. That is why the Polish champions are aiming for a convincing victory at home against Arago de SETE in order to secure their spot in the Playoffs. On the other hand, the French team lost its chances to advance to the next stage after their last defeat against Bre Banca Lannutti CUNEO (0:3). Nevertheless, Arago de SETE – current runner-up of the French league with 9 victories out of 10 games – has still an opportunity to make it to the Challenge Round of the 2013 CEV Volleyball Cup. Thus Wednesday’s game will be very important for both teams.

“We are aware of the fact that our last game in the Pool will be decisive in terms of the promotion to the Playoffs 12. We will do everything which is possible in order to win this duel and get 3 points. If we want to advance to the next round of the competition without counting the sets ratio in other Pools it would be great if we could win 3:0 but it won’t be easy. The French team is always a very difficult opponent to play with as they are famous for their great play in defense and long rallies. We have to play very focused and patient. The positive thing is that we play this last leg of the League Round at home” stresses Aleh Akhrem, the captain of RZESZOW.

“As far as the promotion to the Playoffs 12 is concerned, everything is in our hands but we have to do our job also in the last game. We can’t assume that we will defeat Arago in straight sets – that kind of thinking could be very dangerous and fatal in consequences. We have to concentrate on each section of the game separately and play with the same attitude as if this were the most important game of the Polish League” states Andrzej Kowal, mentor of the Polish team.

“It won’t be an easy game for us. The French team plays incredibly good in defense. They are also risking a lot in service and attack. We remember the third set of our first duel in France in which they demolished us (13-25) thanks to their very risky way of play. Thus we have to stay very attentive and concentrated on our game. If we are able to impose our rhythm of play it would be very difficult for them to defeat us. But we have to do it on the court” adds Jochen Schöps, Asseco Resovia experienced opposite who won the Champions League trophy in 2007.

“We were very disappointed after our last game in Montpellier against Bre Banca Lannutti CUNEO. Maybe we expected that it would be an easier game for us because the Italians came to France without their most experienced players but that wasn’t the case. We lost our chances to advance to the Playoffs 12. Nevertheless, we are still in contention for a spot in the Challenge Round of the CEV Cup, especially if we achieve a good result in Rzeszow. We will be fighting until the end, that’s for sure” concludes Benjamin Toniutti, the captain of Arago de SETE.