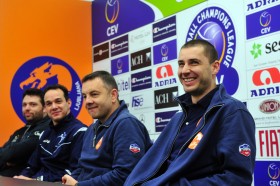 “It will certainly be a very difficult game as we are aware that ACH Volley did not show its true qualities this past October in France, which it definitely did at the matches against PGE Skra BELCHATOW and Budvanska Rivijera BUDVA. Tomorrow both teams will give their best and I hope my players will show their best performance, especially from the serving area” was the initial statement by TOURS VB head coach Mauricio Paes.

ACH Volley coach Igor Kolaković was of a similar opinion: “TOURS VB is undoubtedly a team that showed its quality this season and is currently the first-ranked in Pool F. The biggest problem in our situation is the fact that our future depends on the results of other teams, since we are currently still in contention for being the best third-ranked across all Pools, an option that opens the door for the next round. But this means nothing if we do not win tomorrow and both teams are going for the win. For us it would be a chance to make it into the next round and for TOURS VB it would be simply a better position for the Drawing of Lots and possibly an easier opponent in the next round”.

ACH Volley captain Andrej Flajs stressed: “The atmosphere in the team is optimistic, especially due to the wins in the first weeks of the new year. Tomorrow’s match will definitely be difficult. We are hoping for a win since TOURS VB defeated us flat at the first mutual match and we also lost the previous game in Stožice. Tomorrow we have to play better and give our best”.

TOURS VB came to Ljubljana without one of its middle blockers due to an ankle injury; otherwise all of the players are healthy and ready for the match.

The situation is the same in ACH Volley, where Matevž Kamnik is still recovering.

The representatives of both teams confirmed there was no underestimating of the opponent, despite they have very different motives for winning the game.

Paes also added that his team was currently solely focused on the match against ACH Volley and the win against BELCHATOW belongs to the past.

“ACH Volley is an excellent team and has, in comparison to BELCHATOW, a completely different approach to the game. Its advantage is not in its strength but in the team’s mentality” concluded the guest from France.