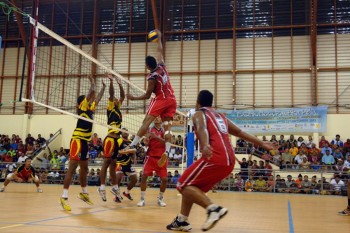 The finals day on Wednesday saw the Tahiti Women’s team continue their reign as the Pacific Women’s Champions gained an emphatic 3-0 win over New Caledonia in straight sets 26-24, 25-7, 25-14.

The Men’s final saw an epic match between the current Champions, and home crowd favourites, Wallis and Futuna and Papua New Guinea. In pool play Papua New Guinea had won a tight match 3-1, but in the final Wallis & Futuna started strongly taking the first set 25-14 with a stronger attacking and blocking game than Papua New Guinea. The second set was a real battle with the teams trading point for point to be 20-20 then 24-24, before PNG took the set 28-26. Set three went to Wallis & Futuna 25-20., before PNG came back to take set four 25-19.

The deciding saw PNG finally get their block working and take an 8-4 lead at the time of changing ends and finish the set in dominant style winning 15-11, to become the 2013 Pacific Mini Games Champions. The pressure will now be on for PNG to retain the title when they host the 2015 Pacific Games.

For PNG their captain Ravuiwa Rau and the Libero Jeffrey Gima had strong games in an all round team effort, while for Wallis and Futuna their setter Boris Takaniko did a great job along with their captain Vitali Tupou who was strong on both defense and attack.

Earlier in the day Fiji Women won the Bronze medal match against Papua New Guinea while in the Men, New Caledonia were too strong for Tuvalu taking the Men’s Bronze medal.