INTERVIEW: Paola Egonu – “I hope to play a lot of important games against Tijana Boskovic”

The FIVB are bringing a great interview with the Italian star Paola Egonu. 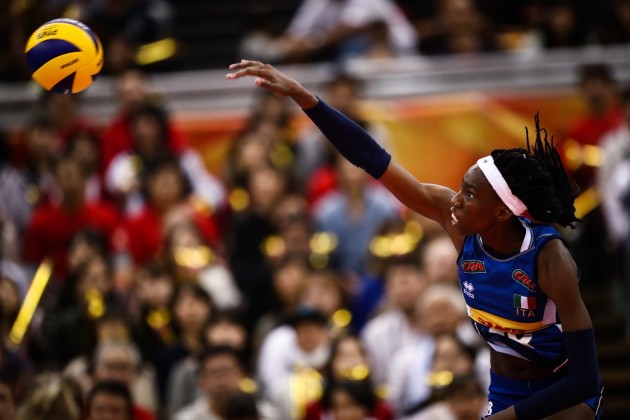 What would you say about being the team’s leading scorer?

“Honestly, I consciously need to mature and improve a lot still if I want to reach my real best. I am proud of my career so far and I am happy to be considered by my teammates as their go-to hitter.”

After your brilliant performances at the World Championship, do you see your rivalry with Tijana Boskovic continuing into the next tournaments?

What do you want to achieve with the national team this year and for years to come?

“After such a wonderful World Championship result, we hope to do our best in 2019 to confirm that we are among the best teams in the world. We want to fight for the European crown and also the VNL. We want to conquer a spot in the Olympic Games.”

Who are you closest to among your team-mates in the national team?

“Miriam Sylla is kind of my big sister. She is for sure the person I am closest to among the national team players, but I also have a wonderful relationship with my roommate Sara Fahr, also Monica De Gennaro and Lia Malinov.”

How is your club season going so far?

“This is my second season at Novara. One year ago, I started my professional career with this club and after a couple of months, I won my first titles – the Italian Supercup and the Italian Cup. Unfortunately, we missed the Champions League finals and also the Italian Championship title. So this season, I want to win those titles. So far, the 2019 season started in the best way possible. A few days ago we won our second Italian Cup in a row!”

Do you see a lot of differences in your role at your club and at the national team?

“I do not see a lot of differences as both roles involve me being the player to attack the most on an important number of balls. I know that I need to give my best to bring my team to victory.”

How do you enjoy your free time?

“Actually, we have a very busy schedule this season, so we haven’t had a lot of free time. I try to enjoy every single moment of it with my friends and when it’s possible, with my family. My family is far away and they live in Manchester, but they support me every day anyway.”

If you were to create your own Dream Team, who are the six players – past or present – you would like to play with?

“My Dream Team would be composed of the following:

What are your expectations for the next edition of the Volleyball Nations League?

“I still don’t know my schedule with the national team because it will also depend on our results in the Italian League playoffs and the Champions League final phase. I hope to play in the final scheduled on May 18, and then I hope to join the national team later. I expect my team to play a great VNL. It will be the first official international competition after the World Championship and we want to show the world that we can be again among the top teams.”

What can the fans expect from Paola Egonu at the VNL?

“What can people expect from me? Pride and passion on the court as always! I love volleyball and I will fight for victory with my teammates in every single game.”

CEV CONFIRM: Get ready for a historic night in Berlin

I am sorry but you are not “real” italian, girl! I guess she is a big fan of “the brilliant” Matteo Salvini!!

Re: @BRAZILvolleygirl
I guess none of your white Brazilians are ‘REAL’ Brazilian as well. None of the US people are ‘real’ us people. Just get out, you can shut your big mouth with these comments. Neither Leal is ‘real’ Brazilian, he does even speak Portuguese.

ITA: Cattaneo – “Mazzanti will be new...