EXCLUSIVE INTERVIEW FOR WOV: Petković stronger than anything

On a Sunday night Dušan Petković, captain of Crvena zvezda, has injured his ankle during the match of the 12th round of the Serbian Superleague against Radnički Kragujevac. It can be said that the injury came at a bad time because in two days his team plays in the second leg of the 8th Final of CEV Challenge Cup against CHAUMONT VB 52. 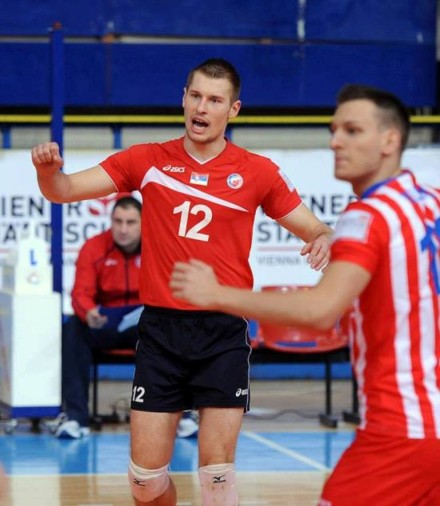 But, in an interview for the WorldofVolley, Dušan has announced good news:

„Injury is not as bad as what all the media have reported. True, when I landed its seemed very serious and scary, but thankfully it is mild case of violation. Now I go to therapy and I will do my best as soon as possible to return to the court.“- said Petković, surely the best player in Serbian league.

Will  you play against CHAUMONT VB 52?

“I still don`t know. I will do my best to be with the team on Wednesday night, but we will see what the doctor will say.”

Despite bad luck, do you find this year best so far in your career?

„I can say that it is. In addition to being the captain of the Zvezda and thus far everything is going well in the national championship, I had the good fortune to play in the qualifiers for the World Championiship in Serbian NT. It encourages me to continue working even harder because in the summer my contract with Zvezda will expire. And the last three years also have been very successful, but I want to finish my cycle with red-and-white with the trophy.“

„I still do not know. Of course I’m thinking about it, but not too much. I do not want to ruin my work in Zvezda now because I will leave. I only wish to defend the title with my teammates, then I’ll think about the new club“

Dušan is in relationship with Sanja Malagurski, the receiver of Molico/Nestle and Serbian national team. She is in Brazil and he is in Belgrade. How do you two make it work?

„I miss her so much, but I’ve never imagined that I would have such a close relationship with Brazil (laugh). We were in Brazil when I played at the U23 World Championship, and then we were together in Belgrade when our national teams have trained for World qualifiers… We use every possible moment to be together. Yes, it`s difficult, but Sanja and I have a healthy mindset and for now, everything is going well.“ – said Dušan Petković, young opposite of Crvena zvezda and Serbia.

INTERVIEW: Ivan Miljković – I do not...