Following the conclusion of the latest round of CEV competitions, the ACPV has released its official club and country rankings calculated from results over the last six years. 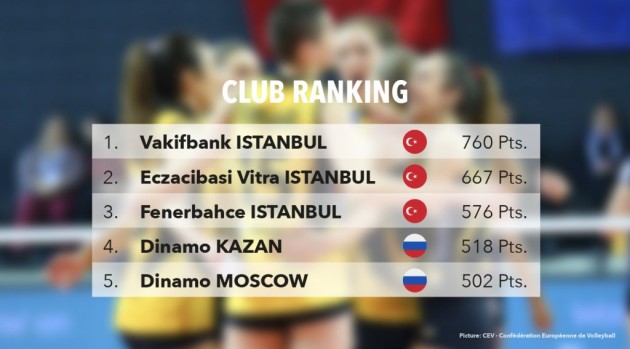 One other Turkish club, Galatasaray SK Istanbul, features in the top ten in the club rankings at eighth, having been semi-finalists in the 2017/18 Women’s Champions League.

The 2018/19 CEV Women’s Champions League holders, Italian side Igor Gorgonzola Novara, sit outside the top ten clubs in 16th position. Two of their compatriot clubs, Imoco Volley Conegliano and Unet Yamamay Busto Arsizio are in the top ten at seventh and tenth respectively. The Italians sit proudly at third in the country rankings.

In second position in the National Ranking is Russia, with two Russian sides included in the top ten clubs table. Dinamo Kazan sit in fourth, whilst Uralochka NTMK Ekaterinburg are ninth.

The top ten club table is completed by French club Volero Le Cannet, who are sixth in the ACPV’s latest classification. The French are fourth in the country rankings as a result.

The top ten of the ACPV Women’s National Team Rankings is then made up of Poland (5th), Germany (6th), Azerbaijan (7th), Romania (8th), Czech Republic (9th), and Switzerland (10th).

The Czechs made the top ten nations as the profile of the sport increases there. At National Team level, they won the 2019 Women’s European Volleyball League final but have no domestic clubs within the top twenty.

However, it is a remarkable rise up the table for Romania in particular, where the volleyball game is clearly reaping the benefits of an increased domestic league profile coupled with CSM Volei Alba Blaj’s success in Europe.

Alba Blaj finished runners-up in the 2018/19 CEV Women’s Champions League, but are yet to break into the ACPV’s reckoning of the top twenty European clubs.

In the country table, there were some surprises with both Serbia and the Netherlands appearing outside the top ten, at 17th and 18th respectively. Serbia are the current holders of the Women’s European Volleyball Championship with the Netherlands having finished runners-up. Neither nation has a club inside the top twenty in the club ranking.