Cairo, Egypt, January 23, 2012- After an eight year absence from the top African level, Tunisia volleyball returned back to the top of the continent after their men’s volleyball team won the African Olympic Qualification tournament in Yaoundé, Cameroon on Saturday to secure a ticket to the London 2012 Olympic Games. 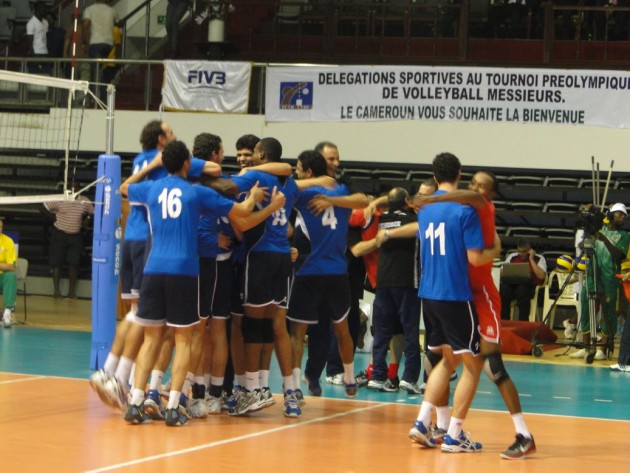 Tunisia have become the first team to qualify from the continental tournaments after Russia, Poland and Brazil secured their tickets during the FIVB Volleyball Men’s World Cup 2011 in Japan alongside hosts Great Britain.

The new achievement comes eight years after the last time they topped the African Podium at the Athens 2004 Olympic qualification tournament. Since then it has been rivals Egypt who won a series of four consecutive Continental Championships in 2005, 2007, 2009 and 2011, in between which they represented the continent at the Beijing 2008 Games.

The Tunisian team demonstrated how far they have come during the qualifications compared with their performance at the last African Nations Championship in Morocco last year, where they finished third. There was more harmony between experienced stars, such as wing spiker Noureddine Hfaiedh “38 y” and center Billel Ben Hasine, and the upcoming players from the junior teams, such as Elyes Karamosly and Marouen Garci.

The Tunisian players found their motivation early on after they saw off African champions Egypt 3-1 in the opening match and then they continued with the same pace to beat Algeria, Ghana and then hosts Cameroon on the final day.

“Now Tunisia is starting to build up a new generation for the Olympic Games and the coming seasons as we had to get the benefit of developing a lot of youth and junior teams who win the African championships in the last few years,” Tunisia coach Fethi Mkaouer said after his team qualified to top event in the world. “I think now we have to work harder to achieve good results in London.”

Tunisia is considered one of the top volleyball countries in Africa and have a record of eight continental crowns as well as six Olympic Games participations after Munich 1972, Los Angeles 1984, Seoul 1988, Atlanta 1996 and Athens 2004.