Fenerbahce Grundig outclassed Hypo Tirol Innsbruck of Austria 3-0 in front of 1080 supporters and will continue in CEV Cup. 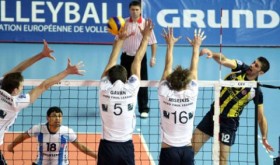 Fenerbahce Grundig led the first set from begining to end, Serbian star Ivan Miljkovic scored 7 points in the absence of Leonel Marshall, passed checkpoints 8:5 and 16:11, put the last stop at 25:17.

Host was still blowing in second set to arrive technical time outs at 8:6 and 16:10, nevertheless Hypo did not give up, used some back up players and bounced back as the game tied at 23, but their experience was not enough to beat such opponent 25:23.

Guest team managed to resist Turkish champion until 12, then local heroes sped up to 16:13, never looked back and finished the set 25:15, so that, FB grundig won the match 3:0.

Ivan Miljkovic of Fenerbahce Grundig was the top scorer with 20 points.