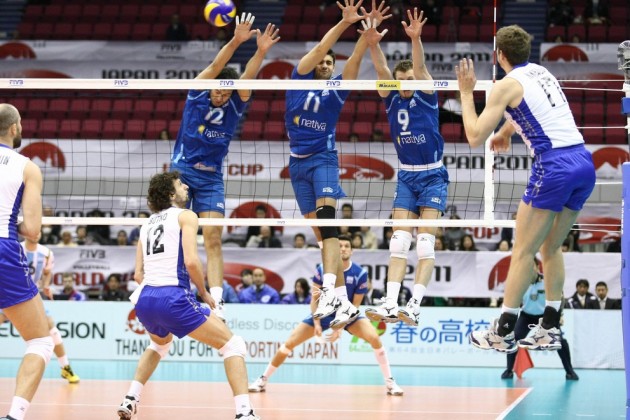 Maxim Mikhaylov attacks in his win over Argentina on Monday

Leading Russia in scoring was Maxim Mikhaylov, the tournament’s sixth leading scorer before Monday’s games, with 16 points. For the losing Argentinian squad, both Facundo Conte and Federico Pereyra had 11 points a piece.

The 22-year-old Conte came out firing for the Argentinians in the opening set, scoring four points early including an ace to go ahead three. He showed great hustle on defense too, running down a ball that went past his own bench, but Nikolay Apalikov would clinch that point to help bring his side back to within one at 8-7. Argentina would build a lead late going ahead 19-15 on a well-placed Quiroga ace. But a block from Alexander Volkov on Pablo Crer brought Russia back level at 19-19, and from there Mikhaylov took over, with three key spikes (of his eight in the set) to take the first 25-23.

In the second Sebastian Solé was blocking well, stopping an attacking Mikhaylov twice, the latter for his fourth block of the match to edge ahead 12-11. Russia was not serving well but managed to take a 16-14 lead at the second TTO with a clever dump up front by Alexander Butko. Argentina would tie at 18 with a Conte spike, but Sergey Tetyukhin put a key block on Pereyra to go ahead by two again, and another block by the captain Taras Khtey on Conte helped close 25-22, two sets to one.

Russia’s Volkov continued to play well up front showing finesse on a soft tip past Argentina’s blockers, as well great defense with a block on Pereyra to go ahead 12-9. Butko followed with a stuff on Conte, his second of the match. Russia still had issues from the service line, but Argentina wasn’t mistake-free either as a Mariano Giustiniano spikes went wide to give the Russians a 21-15 lead, and an Ivan Castellani serve out would give them the match 25-19, three sets to zero.