Tourcoing, France, November 27, 2011. Germany qualified on Sunday for the European Continental Qualification tournament scheduled for May 2012 in Sofia, Bulgaria, after the group around head coach Stewart Bernard claimed the final of the Olympic pre-qualifier that came to a close in Tourcoing. 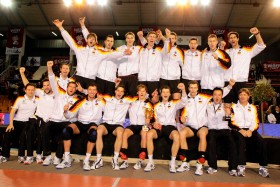 In the final match Germany edged Belgium in straight sets (25-17, 25-23, 25-23) to shatter the Olympic dreams of their opponents that had shocked the hosts of France on Saturday.

The final was nevertheless the real climax after five days of great actions that attracted a large audience in Tourcoing. With Belgium being out of the race for the Olympics, France may still have a chance to enter the intercontinental round coming up next May/June via its good international ranking.

“I think this is a good result for Germany; after our disappointment from the European Champs we have showed our real value. The team did improve match by match and today we played good, especially the critical points. We have to profit of this double chance to qualify for the Olympics, first in Sofia and then in Berlin” stated Germany head coach Stewart Bernard.

“We did not play as good as we did yesterday with France since we were a little tired. We have been playing good here with a young group full of talent. Taking into account my age, this was my last chance to go to the Olympics” concluded Belgium captain Franck Depestele.

WoV DREAM TEAM: Who do you admire...