written by WoV May 5, 2013 source: www.dynamovolleybal.nl 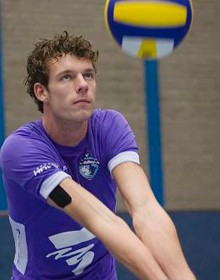 Living in Utrecht, Taanman played in the past for VCE, VC Avance, Peel Quality, talent team HvA, and since 2011 at SSS. Last season Taanman was supposed to his continue volleyball at Bottrop in Germany. Unfortunately, this adventure was canceled due to a knee injury. Now he has recovered from his knee problems. Together with his transfer to Apeldoorn, the 2.00m tall setter qualities recommended him also for the Netherlands Youth and Junior National teams.

Coach Mark Roper is obviously pleased with the arrival of Taanman. “For us Stefan is  of very great value, he is a player that is both appropriate and in attack is very strong. He is a major asset. We are starting slowly to organize the team for the next season, and until now, we think we are doing good. “

Stefan Taanman talked about his move to Draisma Dynamo. “I am very pleased with the transfer to Dynamo Draisma. With this team, I expect that we can compete at the top place in next season.