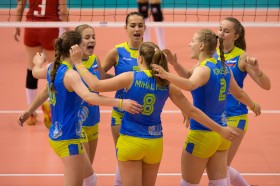 Katja Mihalinec paced the winners with 13 points including aces, while Sasa Zdovc and Ana Bernardi contributed 7 and 6 respectively. Algeria’s Yasmine Abderrahim and Nawal Hammouche led the defeated side with 7 points each.

Slovenia used the skillful passes from their setter Tina Korosec to widely lead 25-6 in the first set, but the Algerian performance improved in the second set to decrease the point deficit to 25-19 in the second set. Algeria led many times in the third set but finally lost 25-20.

AVC: Korea and Iran in semies