FIVB world ranked No.10 Peru, though smaller in size, got off to a flying start to take an initial 3-0 (25-18, 25-18, 25-13) lead in the opening Pool D match at Lipataplop Hall in Nakhon Ratchasima thanks to powerful wing spiker Angela Leyva. 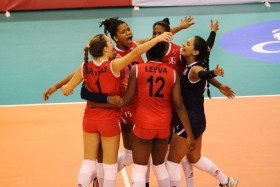 Peruvian girls happy with their game

World No.15 Mexico, whose height average is 180cm against the rivals’ 176cm, hit back bravely. The 194cm-Ana Valle, the tallest in the team, came out with fast spikes to help Mexico level it 5-5 and again 7-7. Peru, cheered on loudly by their supporters carrying horns and speakers performing Peruvian songs, continued their powerful attacks which always went without returning. Trailing far behind 17-24, Mexico tried to regain their composure. Jocelyn Urias saved one set point for Mexico after producing a thundering mid-court drop. However, their challenge did not go the full distance. Diana Valdez‘s serve went to the net for the Peru‘s comfortable 25-18 win in the set.

After going down in the first set, Mexico improved their tactics, hoping to make amends for that loss. However, they still failed to make their mark. Peru captured the pole position 17-11. After a time-out, Mexico gradually pulled their game together and hit back with attacks from Diana Valdez and solid blocking by Ana Valle to narrow the margin 16-18. Luciana Del Valle attacked the taller blockers with her fierce spikes to help move Peru ahead 22-18. From then on, Peru attacked relentlessly to take the second set with the similar margin 25-18 for the 2-0 lead.

Peru remained on course in the third set, which they performed superbly in foiling the Mexico’s attacking attempts. Angela Leyva found her rhythm to attack aggressively to help Peru lead 18-8. They never looked back from then on, allowing Mexico five points to wrap up the set 25-13 and the match.

To find out more information about Angela Leyva, check her WoV Community Profile.