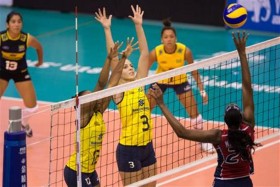 After losing the first set widely Brazil regained their performance and succeeded to block well and rebounded back to win three successive sets.

The youngest player at the competition Natalia Martinez (12 y) conducted her team with her spikes aided by Elizabeth Martinez to win the first set before Brazil arranged their defense to win the second set after a great fight 33-31.

Rehabilitation Exercises for a Broken Ankle