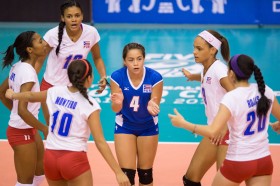 The match was very competitive throughout the whole sets. Tunisia started with more disciplined line up using the spikes of captain Emna Khalfa to perform a good job in attacks in the way to win the first set 26-24. Puerto Rico came back with goods in the second set with Genesis Miranda playing a great role to win the set 25-22.

Puerto Rico continued the same rhythm in the third set and used the frequent mistakes done by the Tunisians in reception and defence to win the set 25-17. Again Puerto Rico won the crucial points of the fourth set to win 25- and the match 3-1.