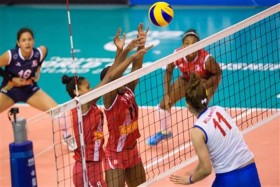 The game came against all the pre- match predictions, considering Serbia’s pedigree and form in this competition as the only undefeated team before they suffered their first upset at the crucial stage especially that this will be their first edition since their participation in 2007 to be eliminated before the semifinal.

Peru is now semifinalists for the first time since 1993 and second time in their history to face World No. 1 China in a thrilling encounter in semis.

Serbia meets Dominican Republic for the 9 to 16 Brackets.

Peru’s captain and outstanding spiker Angela Leyva played an extra ordinary game to finish as her team scorer with 20 points including 3 blocks and one ace service followed by Maguilaura Frias 16.

From the Serbian side again Sara Lozo was the best scorer with 17 points followed by Bojana Milenkovic 16.