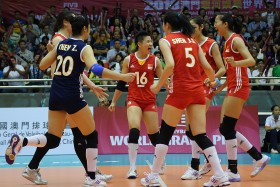 China began strong in the first set, getting a 7-0 lead with spectacular hitting from the wing, which effectively destroyed the Bulgarian defense. Zhu Ting scored three points in a row, helping China to jump ahead to a 20-9 lead. Bulgaria failed to get the right breaks as their spikes barely penetrated the Chinese block, allowing China to take the set 25-13.

In the second set, Bulgaria tried to redeem themselves with an early 10-4 lead, as China had difficulty on the Bulgarian serves and powerful attacks. Unforced errors by the Chinese gave a chance to their opponent to keep a six-point lead before the second technical timeout. However, China battled back and managed to draw even with Bulgaria at 18-all with several ace serves and solid blocks. The Chinese attackers took the opportunity to set the pace and close the set 26-24.

China looked more determined to finish off the match with a 12-6 lead in the third set, but the Bulgarians refused to give up on their challenge against the Chinese by strengthened their wing attacks and blocks, narrowing the distance within one point behind 20-19. Zhu Ting’s kill finally put away the last set in favour of China, winning 25-22.