Darko Zakoc, coach of Partizan Vizura, was calm after winning a Serbian Supercup. He said that there is still a long way in front of his team: 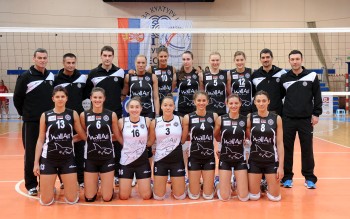 “We played two games in preparation period against Crvena zvezda and they were similar to this one. First we have won by 3:0, then they have beaten us with 3:1. We both still have many ups and downs and you could have seen that in this Supercup. It is because every player has a great desire to win and to start season with a trophy. Our fortune was that we managed to be calmer than the opponent in key moments of the game and avoided some mistakes – said Zakoč.

“Some parts of the match were really good, but some of them were not. But, these players are really young and we should forgive them for their mistakes. For us this is a first step, result of everything what we have done in previous period. It is nice that our names will stay as the first winners of Supercup. It is only a beginning of a season. We will play a lot of similar matches in following period and Crvena zvezda is a very good team. But, our ambitions are highest possible. There is no more hiding about that” – concluded Zakoč.

WCHQ M: Netherlands in front of others