Brazil delighted the home crowd with a victory in their first Men's U23 World Championship match – 3:0 (21:12, 21:6, 21:10) against Dominican Republic on day one of competition at the Arena Presidente Tancredo Neves. 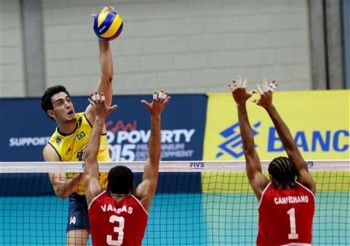 Brazil varied their attacking options in the first set with points coming throughout the team as they won it 21-12, while wing spiker Rafael Araujo became more prominent as Brazil powered through the second set.

Brazil moved to 10-0 and as the set progressed coach Roberley Leonaldo decided to insert some of his bench players into the match, and they closed out the second set 21-6.

Rafael was a dominant presence at the net in the third set and finished with a total of five blocking points, part of a match-leading 12 points in total. Middle blocker Matheus Cunda also contributed eight points in the comfortable victory.

Dominican Republic resistance came from captain Luis Adames Figueroa who claimed five attacking points for his team, but Brazil were simply too strong.