The Italians, who picked up an impressive game one win against Russia to open the 2013 FIVB Volleyball Men’s World Grand Champions Cup, faced a determined Iran team who were coming off a loss against Brazil. These teams had played five times before, with Italy coming out on top in four of those contest, most recently winning 3–2 in World League competition in Sassari. But Iran came to play at Kyoto Prefectural Gymnasium, taking a tough match over Italy 3–2 (26–24, 16–25, 25–23, 23–25, 15–12). 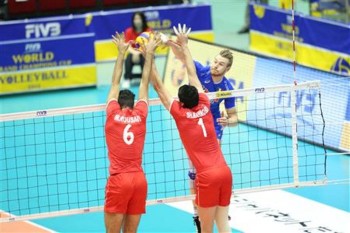 Leading the way for Iran was Mohammad Mousavi Eraghi, who put up an incredible defensive effort, with eight of his 17 scores coming from blocks. Italy had five players in double digit scoring, led by Jiri Kovar, also with 17 points.

Iran served up trouble for the Italians early in the first, with a pair of aces from Farhad Ghaemi and Adel Gholami putting their side ahead 6–2 forcing Italy into a timeout to regroup. They came back onto the court refocused, and hung close until late, when a Ghaemi stuff on Italy captain Emanuele Birarelli helped spark a five-point run to give Iran a 23–19 advantage. Italy rallied with great blocking from Michele Baranowicz and Birarelli, but Iran would capitalize on their third set point, with Gholami putting a stuff right back on Italy’s Baranowicz, 26–24, one set to zero.

The second set was equally competitive in the early stages, with multiple attacks from Italy’s Ivan Zaytsev and and Iran’s Mousavi Eraghi canceling each other out. But a few misfires at the net by Iran’s Ghaemi gave Italy the momentum to pull off a six-point run to go head 14–8. A Jiri Kovar block on Rahman Davoodi, who came in off the bench for Iran, extended Italy’s lead to 20–12. But more scoring from Zaytsev and Birarelli (five points each in the set) would take the second set for the Italians, a kill from the latter making it 25–16, one set apiece.

In the third set, Thomas Beretta got his game going, edging Italy ahead 9–6 with an ace, following with a hard spike, and then block on Mousavi Eraghi to make it 15–12 for the Italians. With both sides defending well, it was Italy who lapsed first with a pair of errant attacks from Birarelli letting Iran ahead 23–22, and that was all the Asian champs needed, as Mahmoudi’s eleventh score of the match took the third set 25–23.

Iran’s Mousavi Eraghi showed why he deserves to be mentioned among the world’s best blockers, with three straight stuffs  putting his side up 5–1 to open the fourth set. But Italy powered back with aggressive serving from Luca Vettori (off the bench) and Kovar who combined for an amazing five aces to help Italy jump back ahead 12–8. Iran battled back to tie 21–21, but Italy would narrowly take this set 25–23, thanks to great defensive hustle by the libero Salvatore Rossini who set up Kovar for a score, evening the match at two sets each.

Iran looked sharp in the tie-break with Mousavi Eraghi continuing his great play with a pair of kills and an ace to take a 7–4 lead. Italy responded by hammering away on the right side with Vettori with some success, but Mousavi Eraghi finally shut him down with his seventh block to make it 12–7, and then again with his eighth to give match point at 14–10. A Mahmoudi spike would then clinch the set 15–12, and the match 3–2.

WGCHC M: ”We can be among world’s top teams” – said Marouflakrani