Players of Igtisadchi have done their part of the job. They have beaten Crvena zvezda, won all three points, and are at the moment the best third team… But, Azeryol, Prostejov and Dinamo Bucuresti still haven’t played their games. 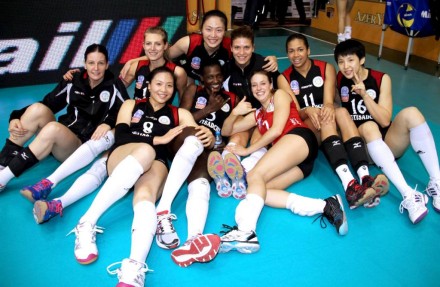 Igtisadchi had 23-21 when the opposite of Crvena zvezda Adela Helić made three straight points (two attacks and block) for 23-24. Despite that, Azerbaijan side got back and had two set points… But they missed them, while red and whites have used the third one for 27-29. Jelena Trnić has made two aces.

The rest of the game was a total different story. Igtisadchi, which were missing some key players in this match, got serious and easily won three sets in a row.