It did not happen but PGE Skra BELCHATOW was never before that close to seize the CEV Volleyball Champions League; the hosts could not silver a total of three match balls – one in the end of the fourth set and two more in the tie-break – while Zenit showed some killing instinct by exploiting its very first opportunity to double the victory claimed four years ago in Lodz. The final score (3:2, 25-15, 16-25, 22-25, 26-24, 17-15) fully reflects, especially for the last couple of sets, the drama that unfolded in Lodz in front of a sold-out house with some 13’000 people in attendance. 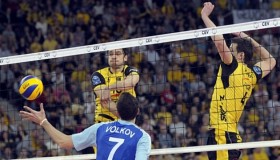 This was the moment that PGE Skra BELCHATOW and thousands of fans had been waiting for since the club debuted in the CEV Volleyball Champions League 6 years ago and after the couple of attempts previously failed in 2008 and 2010, this time the local heroes did not want to miss the chance to take the very first title for Poland in what is unanimously seen as the world’s most elitist and prestigious club competition. The two bronze medals taken by Skra at the finals held in Lodz four and two years ago – combined with that same honor claimed back in 2003 by Mostostal-Azoty KEDZIERZYN – were so far the country’s best result in the competition while Zenit still had great memories from the 2008 final four where the side then named Dinamo-Tattransgaz had come out on top of Europe after edging Copra PIACENZA of Italy in the last act of the tournament.

The atmosphere at “Atlas Arena” was simply great, with 13’000 fans in attendance, once again a perfect yellow-black wave that was certainly going to be more than just a seventh player for Skra while embarking on a quest to write an additional chapter in the history of the sport in that country that is worldwide known as a real “Volleyball Mecca”. With their drums, outfits, gadgets and choirs the local fans did live up to their great reputation while everything was well ready for the start of a predictable high-class Volleyball show.

Zenit claimed the first three rallies of the game and it looked like PGE Skra was feeling the evident pressure associated to this home final; on the other side of the net, Russia’s champions appeared more than determined and extremely focused, with Mikhailov spiking from the back row to call for the first mandatory stop (8:3). Zenit block was always well positioned and two in a row moved the score up to 11:3, with the only option for local mentor Jacek Nawrocki remaining a time-out to calm down his protégés and trying to stop the march of a speedy Russian express. It worked as Marcin Mozdzonek – the captain of Poland’s national team – scored the next attack from the middle and Michal Winiarski followed with a splendid spike from the wing. However, Zenit KAZAN quickly re-established its leadership (13:5) by relying on a starting six that almost corresponds to that of the Russian national team, with the only exception being Italian-born setter Valerio Vermiglio. The Tatars were doing a great job also in defense thereby prolonging all rallies and making it difficult for Skra to score while wing spiker Evgeny Sivozhelez was as outstanding as in yesterday’s semifinal with TRENTINO (19:10), so the final result (25-15) was the logical consequence of that total domination.

After an excellent start of Skra (3:0, 8:4), contributed chiefly by the service of Bartosz Kurek, another break was claimed after the home guys won a “challenge” on an ace of Miguel Angel Falasca that was initially called out by the referees (11:6). The course of the game had totally changed in comparison with the first set as BELCHATOW had finally found its rhythm (16:9) with all attackers scoring with great consistency from all positions. Zenit got back on track by scoring three in a row (16:12) by that did not last that long, as Skra re-started its incredible run and with the fantastic support of their fans, the hosts scored more and more to bring it home via a serving error of Zenit (25-16).

The score stayed initially very close in set 3 before Skra clipped a mini break (11:8) that spread even more enthusiasm across the fans. However, Zenit did not let it go that easily and fought back with great determination drawing level at 12 on a silly error in defense by Michal Winiarski. Mariusz Wlazly concluded a very long rally to move his side to the front by the second mandatory stop (16:15) and after another close run, Skra opened a small cushion (23:20) that was eventually kept until the end (25-22) for the great joy of the 13’000 people in attendance.

Skra had enjoyed great figures in set 3 (76% of efficient reception) but the game was not yet won especially as the “Russian bear” was ready to fight until the end to avoid a scenario whereby the hosts would have fulfilled a long-lasting dream. A very tight battle unfolded also in the fourth set with no side being able to clip a margin of even two points; Skra set the pace for most of the time before Zenit went briefly to the front and the local guys restored their leadership with a block of Marcin Mozdzonek (12:11). The speaker called for the loudest possible support from the stands as Skra was lagging behind by one point by the second technical time-out (15:16) and the fans responded with their choirs thereby pushing Mariusz Wlazly to promptly clip the next rally. In that section of the game Zenit lined up US American and 2008 Olympic champion Reid Priddy and the Tatars even won a “challenge” on an attack of Wlazly that had initially been assigned to Skra. By this moment Zenit could – for the first time in the set – enjoy a margin of 2 (19:17), Mikhailov moved it up to 20:18 but a block of Falasca restored the balance only a few seconds later (20 all). Once again it was Wlazly that took his side by the hand, contributing two more points for the 23:22 in favor of his group before being blocked for the 23 all. The emotions were no longer easy to control but Wlazly kept cool and contributed a match ball that Zenit coach Alekno tried to divert also by calling a time-out. Wlazly served into the net and a block out on Mikhailov prompted then a set ball for KAZAN before a “lucky ace” of Nikolay Apalikov called for the tie-break (26-24).

Skra was not that influenced by the fact that it had already missed a chance to seize the trophy and actually caught a simply great start in the deciding fifth set (5:1); Zenit clawed back once more (5:5) and some errors followed before a challenged was asked by Skra – but unsuccessfully – so that Zenit could tie at 7. Skra got to the front again (9:7) by profiting of an error contributed by Maxim Mikhailov; another tie arrived at 10, more palpitations followed as the “yellow and black tribe” missed two more match balls, Kurek was blocked and Zenit did not miss its first chance to take the Champions League for the second time in history.

CWCH M: It was volleyball lesson by...