"Jenny" Lang Ping (born December 10, 1960 in Beijing), is a former Chinese volleyball player and the former head coach of the United States women's national volleyball team. Her nickname is the "Iron Hammer". 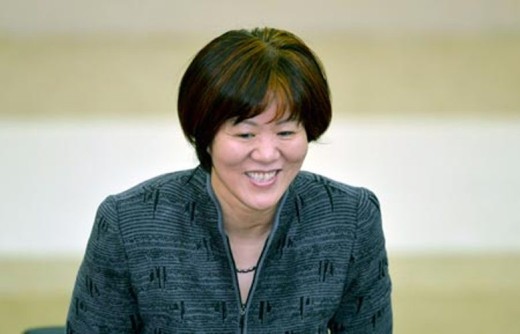 Lang was a member of the Chinese National Team that won the Gold Medal over the United States at the 1984 Summer Olympics in Los Angeles, California. She was also a member of the team that won World Championship crown in 1982 in Peru and World Cup titles in 1981 and 1985.

In 2002, she became an inductee of the Volleyball Hall of Fame in Holyoke, Massachusetts.

In 1995, Lang became the head coach of the Chinese national team and eventually guided the squad to the silver medal at the 1996 Summer Olympics in Atlanta, Georgia and second place at the 1998 World Championships in Japan.

Lang Ping resigned from the Chinese national team in 1998 due to health reasons. In the following year, she took a head coaching position in the Italian professional volleyball league and enjoyed great success there, winning the league championship and the coach of the year award multiple times.

She became the coach of the US National Team in 2005. Lang guided the team to the 2008 Olympics, where the US team faced off with China in her home country.

The US team defeated China 3-2. Chinese president Hu Jintao attended the match. The match drew 250 million television viewers in China alone. The team went on to win the silver medal, losing to Brazil in the finals 3-1. Lang resigned from the position in 2008, citing that she wanted to spend more time with her family.

She is now coaching the China National Team and Evergrande.