RUS W: Ksenia Bondar will hold in Tyumen for another season

Tyumen Tyumen State University Tyumen Ksenia Bondar extended the contract with the club for another year. 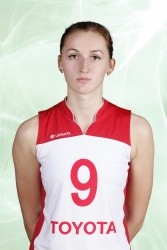 Before the 2011 volleyball club near Moscow for Zarechie Odintsovo from which the team moved to Tyumen.

It is worth noting that Ksenia Bondar became the most productive player on the team in the regular Championship 2011/12.

INTERVIEW: Erica Handley for WoV – “As...