The leader of the women's volleyball team Russia Lyubov Sokolova, recognized the best player in the pre-Olympic tournament, commented on the victory in the final of the Romanian, noting that was glad to arrive in Kaliningrad. 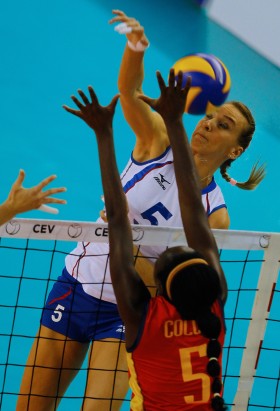 “Romanian has shown us that were really worth playing in this tournament in the finals. The final matter with which you play an opponent – it’s always hard. We done a good job, but we know of what else we have to work in the future, what mistakes were admitted.
I am happy that I came here. Now is still a break in the Turkish championship. In the given situation the superfluous game practice will go only on advantage. Especially to play for national team of Russia to me it is pleasant, I am pleased and I’m always ready for this in the future “- quoted Sokolova, RIA Novosti.

Thus titled volleyball player has noted that she was very pleased to receive the Audience Award.

“For me, this is the highest achievement. Besides on the native land. It was very solemnly and pleasantly. Many thanks to fans, organizers. It was held a great tournament, which became a holiday for us,” – added Sokolova.

RUS W: Ksenia Bondar will hold in Tyumen for another season

President of Belogorie – “There is nothing...