The two FIVB World Championships are the highlights of the year. Each week in the run up to the title showdowns for the men in Poland (August 30 to September 21) and for the women in Italy (September 23 to October 12), we will introduce an international volleyball star. In part 14 of the series, we tell the story of the queen of Japanese volleyball, Saori Kimura. 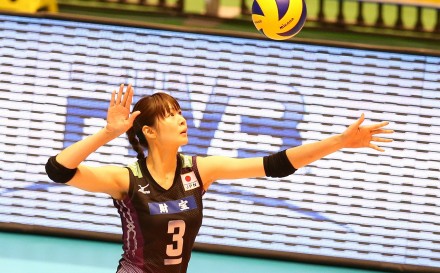 Saori Kimura has a mission: to make the many Japanese volleyball fans happy by winning a major event. Japan won the World Championships three times between 1962 and 1974, and won an Olympic gold in Montreal in 1976. That is now 38 years ago, however, and the FIVB World Championships next month in Italy represent a chance to end years of suffering.

At the Grand Champions Cup last year – the last major event in women’s volleyball before the FIVB World Grand Prix taking place at the moment – the Japanese women were in with a chance of winning the title until the final match. “Japan haven’t had such a chance to win a big tournament for 20 or 30 years, so I thought that was good. I want to get rid of the stereotypes of what Japanese volleyball is all about,” said coach Masayoshi Manabe.

The key to his plan is national hero Kimura. Even Olympic Games winners Brazil, the clear favourites, have started to fear the Kimura team. “They have grown up more than other teams in the last four years. Of course, they need to improve their block, but before 2009 Japan were always sixth or seventh in the world; now they are on the podium every time. They improved and I think they are close to us,” said Brazil coach Ze Roberto.

INTERVIEW: Dawid Konarski for WoV – “We...