With the victory, second-ranked USA National Volleyball Women Team moves into first place with a 9-1 record and 26 points. Italy falls to 9-1 with 25 points. The Americans finish the competition on Friday against host Japan (6-3, 19 points before Thursday night’s match with Germany) at 6:20 p.m. local time (1:20 a.m. Pacific Time). Italy concludes the tournament against winless Kenya (0-10, 0 points) on Friday at 11 a.m. local time. The U.S. will claim the FIVB World Cup 2011 title with a victory in three or four sets over Japan. 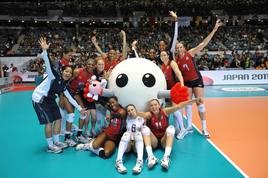 Team USA celebrates not only its victory over Italy, but a spot into the 2012 Olympic Games, FIVB

Otherwise, a five-set win will likely force a tiebreaker with Italy. More importantly, the U.S. earned a spot into the 2012 Olympic Games as the FIVB World Cup awards its top three teams berths into next year’s London Games. Not only are the Americans in a position to win their first-ever FIVB World Cup after consecutive bronze-medal finishes in 2003 and 2007, they are assured of finishing with at least the silver medal with just Japan remaining on the schedule.

“I’m extremely, extremely happy for our team — not just for tonight, but for the whole tournament and indeed the whole year,” U.S. Women’s National Team Head Coach Hugh McCutcheon (Christchurch, New Zealand) said. “It’s been a long international season, and our team has accomplished almost all of its goals. This is a special group that we have right now. I feel a lot of gratitude to our athletes and staff for all the work they do to prepare our team. Knowing we’ve qualified for the Olympics is a wonderful feeling. We have one more match tomorrow, but we’re going to London and that’s a great, great thing for us.”

“I just think our team is playing better volleyball than a year ago,” McCutcheon said. “I also think they are a better team than a year ago. The athletes truly care about each other, and play for each other — just not with each other. Lindsey is a great captain, and she mentioned Logan. They want to represent their country and do it to the best of their ability. And that’s what it’s about.”

Berg: Every time with Italy is a cat fight

“Wow,” Berg said after the match. “First of all every time we play Italy it’s always a cat fight. They were undefeated, and we congratulate them on a great tournament. I want to give credit to Logan Tom who has been our rock in this tournament. It’s a big win for us now that we’ve qualified. But we want to win the tournament, and the journey continues for us.”

McCutcheon started Berg at setter, Tom and Larson at outside hitter, Akinradewo and Bown at middle blocker and Hooker at opposite. Davis was the designated libero for the match. Danielle Scott-Arruda (Baton Rouge, La.) was a sub in all four sets, while Cynthia Barboza (Long Beach, Calif.) was a sub in the final three sets.

The U.S. serve produced a 6-0 advantage in aces to counter Italy’s 9-8 margin in blocks. Team USA held a 63-58 advantage in kills, in addition to a 43-35 margin in digs. Carolina del Pilar Costagrande led Italy with 26 points, while Simona Gioli added 17 points.

“First of all congratulations to my friend Hugh [McCutcheon],” Italy coach Massimo Barbolini said. “We have lost a battle against one of the strongest teams in world. I can only say thank you to my team for an amazing tournament. After a bad second set we tried to fight to arrive at tie break, but the USA played better and they deserve the victory. I’m very happy with my team for an amazing tournament.”

Team USA will now look toward the match with Japan with an eye on a possible gold medal.

“Japan is a very good team, and in all international volleyball the margins are very small,” McCutcheon said. “If we can play well in serve/reception and if we can side-out – if we can do that then we can play with anybody. Those will be the key elements.”

“We’re definitely a different team than last year at World Championship,” Berg said in reference to Japan’s victory over Team USA at the 2010 FIVB World Championship in the bronze-medal match. “We’ve grown as teammates together, and did lots of work this past summer to get better. Our first goal was to qualify, but we want to win this tournament. We know Japan will be at their best in front of the home crowd. We’re just going to rest and do our best against them tomorrow.”