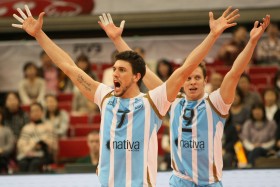 Federico Pereyra and Facundo Conte spearheaded the Argentine assault with 15 and 14 points, respectively, in the comprehensive victory.
Pablo Crer had five blocks for the winners.
Ivan Miljkovic paced Serbia with 11 points.

Conte was named the most impressive player of the match scoring 15 points while Miljkovic Ivan scored 11 for Serbia.

Serbia finished third at the 2010 FIVB World Championships, while Argentina was ninth.

Miljkovic started Serbia off with a beautiful dink for the first point of the match. Argentina responded with five straight points and the Serbs called timeout, trailing 5-1. The South Americans led 8-4 at the first technical timeout. A spike by Mariano Giustiniano off a nice option play put Argentina up 14-10 and his side led 16-10 at the second TTO. With set point at 24-20, Conte sent a serve long, but Argentina took the set 25-20 on the ensuing point. Pereyra had eight points all alone for Argentina in the first set. 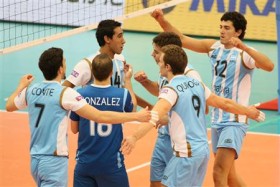 Argentina was in front 8-4 at the first TTO of the second set behind the continued strong play of Pereyra and Conte. Luciano De Cecco made a nice block at the net to put Argentina up 10-5. Argentina led 16-8 at the second TTO as they continued to display good teamwork and strong defense at the net. A long serve by Crer that sailed out put Argentina ahead 17-9 as the South Americans continued to gain momentum to close out the set 25-13 with a slick reverse dink by De Cecco.

Sebastian Solé soared high with a spike to give Argentina 5-3 lead in the final set. Milos Nikic responded with a blast for Serbia to make it 5-4. Argentina led 8-7 at the first TTO. Another spike off a nice option play by Conte made it 11-9 for Argentina. Serbia took a timeout with Argentina up 14-10. The Serbs tried to fight back in the third set, but just could not find the answer for Argentina’s skill and athleticism. Argentina led 16-12 at the second TTO. Milos Terzic brought Serbia within 18-14 with a spike, but Dragan Stankovic served long on the next point. When Argentina scored with a block to make it 20-14, the result was all but academic. Argentina completed the victory when a Serbian spike attempt sailed long.

Andrea Anastasi for WoV – ”Juantorena is...