Zbigniew Bartman (21 points) and Michal Kubiak (15 points) spearheaded a balanced Polish attack in the hard-fought match that featured both great individual and team play. Kubiak was named the most impressive player of the match. Ivan Miljkovic was the high scorer for Serbia with 15 points. 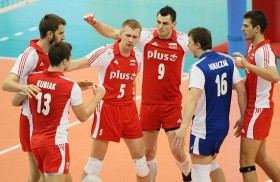 Serbia lost its opening match to Argentina on Sunday, in Volleyball World Cup in Japan, while Poland defeated Cuba the same day. Poland came out strong and led 8-5 at the first TTO in the opening set, with Dragan Stankovic scoring three early points. A great rally ended with Poland’s Michal Winiarski send a spike too long. The Poles led 16-15 at the second TTO. Serbia began to apply pressure with strong attacks and Poland made some unforced errors, allowing the Serbs to take a 22-20 lead. Moments later a spike by Milos Nikic gave Serbia set point at 24-21. Serbia eventually took the set 25-20 on a cross-court spike by Miljkovic.

Poland was up 8-5 at the first TTO in the second set. Serbia moved with 8-7 on a tough block by Marko Padrascanin. Later, with Poland leading 20-14, Serbia took a timeout to try and regroup. Stankovic responded by drilling a spike out of the timeout to make it 20-15. Poland kept the pressure on, however, and took the set 25-18.

Kubiak unleased a vicious serve that struck one of the Serbian players in the chest and gave Poland a 6-4 lead in the third set. Afterwards, Kubiak fired another sublime serve to make it Poland 16, Serbia 12, at the second TTO. Serbia battle back to pull within 18-17 and Poland took a timeout. A serve by Stankovic sailed out and Poland claimed the set on the next point 25-19.

With Serbia up 13-12 Bartman drilled a spike to equalize, but served long on the ensuing point. Serbia was ahead by a single point (16-15) at the second TTO. Poland took a three-point lead (19-16) on a nice tap by Marcin Mozdzonek. Back and forth it went until 28-28, Mozdzonek blocked to give Poland match point and they closed it out 30-28.

Makare Wilson still have a chance to play against Parma