Italy bounce back with team effort against Egypt

After a difficult late night opener against top-ranked Brazil on Sunday night, things didn’t get any easier for Egypt on Monday morning facing third-ranked Italy after a very short rest.

Italy volleyball national team, having lost their opener to Russia having been up a set, didn’t leave anything to chance in this match with a number of players stepping up to take an important day two, three-set win (25-22, 25-15, 25-20). 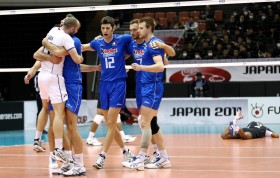 Egypt’s Abdalla Ahmed (back) left it all on the floor today in an emotional effort, FIVB

The Italians put up a true team effort on this day with great performances by Alessandro Fei with 12 (and four blocks), the captain Cristian Savani with 11, and Michal Lasko and Ivan Zaytsev with 10 a piece. Leading Egypt in scoring for the second straight day was Ahmed Abdelhay with 13.

Serving was the story in the first set, as Egypt — despite a lack of rest — looked ready for the Italians as a pair of consecutive aces from Mohamed Bawawy (aka Moneim) put them ahead 9-6. But Fei responded with an ace of his own to tie at 13-13, and dropped yet another to give his side a three point edge. Solid attacking up front from Zaytsev helped Italy extend to 24-19, and though Egypt showed determination fighting off four set points, a hard Lasko spike closed it for Italy, 25-22.

Zaytsev was attacking well for Italy to start the second set, scoring their first three points and putting an incredible stuff on the lefty Abdelhay to go ahead 9-7. He subsequently delivered two aces on a seven-point run for Italy, which also saw the captain Savani chip in with two smashes as well to go up 18-9. Italy complemented their attack with a stingy defense late, with Andrea Giovi digging well and Simone Buti putting up a block near the end to help take an easier second frame 25-15.

Egypt’s star Abdelhay wasn’t going down without a fight, scoring the first three for his side, including a high-flying spike that found it’s mark to stay within two. But the Italians would power ahead as Egypt committed some costly errors mid-set, Abdalla Ahmed kicking the ball in frustration after spiking into the net, allowing Italy a 15-10 lead. Perhaps sparked by his emotion, Egypt did muster a seven-ten run late, powered by aggressive blocking to cut it to 21-19. But Fei, the fan-favorite on the day with the many school girls in attendance, scored the last of his 12 points to end the set 25-20, and the match 3-0.

INTERVIEW: Sergiu Stefanescu – “We are very...