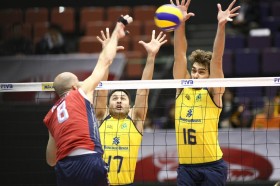 Clayton Stanley couldn’t get into his rhythm today against the Brazilian blockers, FIVB

These two powerhouses were neck-and-neck to start, though both had serving issues at times. Neither team held more than a one-point lead until Murilo Endres dropped two spikes from the wing, and Lucus followed with a smash to go up 15-12. They would hold that cushion with Murilo dropping an emphatic smash into the chest of Ryan Millar to go up 20-16, starting a 6-1 run highlighted by stubborn blocking by Lucas and Theo Lopes to close 25-17.

Vissotto was hot for Brazil in the second, setting the tone early with a hard block on Clayton Stanley, which Brazil kept quiet during the match. Visotto was solid from the service line too, throwing down an ace to go up 11-10. That was the second score on a five-point run capped by a high-flying smash from the Gilberto Godoy Filho (Giba) on the wing to go ahead by four. At end, Vissotto claimed the set fittingly with an ace.

Anderson and Stanley stepped up in the third for the USA, the latter giving his side a 9-6 edge with a crisp smash from the wing. They’d nurse that lead until breaking loose mid-set with Stanley’s second ace putting them up five and a drive from Anderson (who had eight in the set) made it 18-11. David Lee posted two strong blocks for the USA, and a pretty smash from Reid Priddy to the baseline helped close, 25-16, down two sets to one.

But Sidnei dos Santos Jr. (aka Sidão) had every intention of bringing this match to a close in the fourth, posting a block early and following with consecutive aces to go up 7-5. He posted his second block on Priddy to go ahead five, and then another two on Anderson back-to-back for a commanding 17-10 lead. In the end, final score was 25-16.

Makare Wilson still have a chance to play against Parma

Italy bounce back with team effort against Egypt

INTERVIEW: Ronald Jimenez for WoV – “The...