Beograd, Serbia, December 26, 2011. Volleyball swept quite many of the end-of-the-year awards traditionally assigned by the Serbian Olympic Committee, with Jovana Brakocevic being voted Sportswoman of the Year, Uros Kovacevic selected as Best Young Athlete and the women’s national team taking the prize for the Female Team of the Year for the sixth consecutive time. 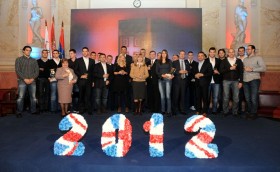 Additionally the Volleyball Federation of Serbia was presented with the IOC Trophy for “Sport and Social Responsibility” during the ceremony held at the premises of the Serbian Parliament in Beograd.

Jovana Brakocevic had a memorable year, being crowned European champion this past October with Serbia national team after winning the 2011 CEV Volleyball European League in mid July and taking bronze at the finals of the FIVB World Grand Prix in Macau.

Brakocevic – who currently plays in Japan national league for JT Marvelous – was voted MVP of the 2011 CEV Volleyball European Championship as well as of the European League finals, taking the award for the “Best Scorer” at the end of the last stage of the 2011 FIVB World Grand Prix.

Brakocevic was not able to attend the ceremony and head coach Zoran Terzic received that unique trophy directly from the hands of basketball legend Vlade Divac, who is the current chairman of Serbia’s Olympic Committee.

The only 18-year old Uros Kovacevic was also one of a kind as he seized gold at the Youth European and World Championship in Turkey and Argentina, being also voted MVP of both events (not to mention the “Best Spiker” award he was also presented with in Ankara).

Kovacevic was also part of the Serbian junior national team that ended up in third place at the World Championship in Brazil and in early September he joined the senior group that eventually finished atop of the standings at the EuroVolley 2011 in Vienna.

Kovacevic received his distinction for Serbia’s “Young Athlete of the Year 2011” from Mr. Athanassis Makris, CEO of “Vojvodanska Banka”.

Serbia women’s national team was celebrated – for the sixth consecutive year – as best female national team after a season that included European gold – for the first time in history – together with a third straight European League title and a bronze medal from their first participation in the FIVB World Grand Prix.

CEV Senior Vice President and VFS President Aleksandar Boricic received from Mrs. Snezana Samardzic-Markovic, Serbia’s Minister of Youth and Sports, the IOC Trophy for “Sports and Social Responsibility” to celebrate the impressive work delivered by the Volleyball Federation of Serbia for the development and promotion of the sport across all age groups.

Serbia’s Sportsman of the Year 2011 is tennis superstar and world no. 1 Novak Djokovic whose Slovak-born trainer, Marian Vajda, was awarded as Coach of the Year.

The men’s water-polo national team – silver medalist from the World Championship held this summer in Shanghai (China) – was honored as best male national team of the past 12 months.

Italy: In the capital