Today we will write about volleyball block. 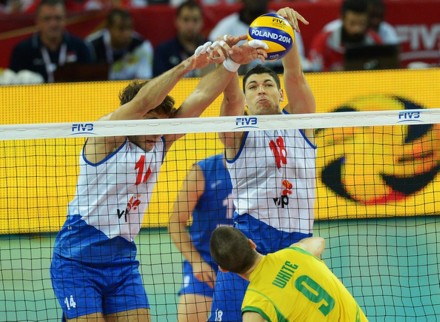 14.1.2 Block attemptA block attempt is the action of blocking without touching the ball.

14.1.3 Completed blockA block is completed whenever the ball is touched by a blocker.

14.1.4 Collective block
A collective block is executed by two or three players close to each other and is completed when one of them touches the ball.

Consecutive (quick and continuous) contacts with the ball may occur by one or more blockers, provided that the contacts are made during one action.

14.3 BLOCKING WITHIN THE OPPONENT’S SPACE

In blocking, the player may place his/her hands and arms beyond the net, provided that this action does not interfere with the opponent’s play. Thus, it is not permitted to touch the ball beyond the net until an opponent has executed an attack hit.

14.4.1 A block contact is not counted as a team hit. Consequently, after a block contact, a team is entitled to three hits to return the ball.

14.4.2 The first hit after the block may be executed by any player, including theone who has touched the ball during the block.

To block an opponent’s service is forbidden.

14.6.1 The blocker touches the ball in the OPPONENT’S space either before orsimultaneously with the opponent’s attack hit.

14.6.2 A back-row player or a Libero completes a block or participates in a completed block.

14.6.5 Blocking the ball in the opponent’s space from outside the antenna.

14.6.6 A Libero attempts an individual or collective block

NEXT, PART 25: Interruptions in volleyball