Fukuoka, Japan, November 26, 2011 – Top volleyball is returning back to Fukuoka a couple of years after the largest city located on the southern island of Kyushu played host to matches of the 2009 FIVB World Grand Champions Cup.

The Asian contingent for the third round of play in the 2011 FIVB Men’s World Cup is quite strong here with hosts Japan being joined by Iran and China for the next three days of action at “Marine Messe”, the magnificent local sports hall that has got a capacity of 15’000 seats. 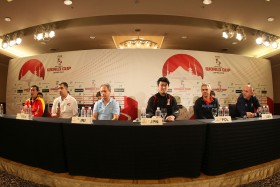 The head coaches of the six teams assigned to Site A

The home team of Japan did not claim any win in Nagoya and Osaka but head coach Tatsuya Ueta says “the motivation is still high and all players are looking forward to playing at their best” in Fukuoka. We have been reviewing and analyzing our previous matches and we realized that we narrowly missed the opportunity to take home one or even more games”

China recently took two sets from triple world champions Brazil in Kumamoto but head coach Zhou Jianan admits his side was helped by the strategy of his colleague Bernardo Rezende who opted for his back-up players, thereby easing up the task of the Chinese squad. “The first half of this tournament was not that successful” he said while opening the press conference held tonight at “Sea Hawk” hotel in Fukuoka. China is ranked at the bottom of the standings but is looking forward to the match with the home heroes. “Japan has got a very special style of playing volleyball but we hope to stop our negative trend and take home some points from this round” adds Zhou.

The Pools for the 13th World Beach...

Monika Potokar for WoV – “Turkey have...

Do you want to drive Matt Anderson’s...