Hamamatsu, Japan, November 26, 2011 - Round three of the FIVB Men’s World Cup kicks off on November 27, and the six coaches at Hamamatsu's Site B looked ahead to what will surely be a tough three days. 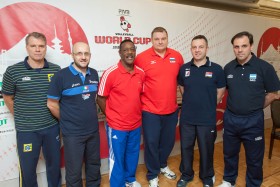 Argentina coach Javier Weber: We are happy to join this international competition. In this round we are faced with three great teams against us, but we’ll do what we can, and as usual, do our best to win this competition.
On tomorrow’s match vs Brazil: As you know they are one of the best teams in the world. It will be our toughest game, but we expect to give 100 percent, and focus on good services tomorrow.

Brazil coach Bernardo Rezende: This pool in Hamamatsu is one of best pools; six of the eight best teams in the world. It’s very tough beginning with Argentina – a young, talented and well-coached team. Then we have Cuba, then Serbia. It will be very tough, but we hope we can get the points and come closer to qualifying. It will be tough, but we’ll do our best to play more consistently here.
On the scoring system, where winning teams get two points for a five-set win instead of three: I think the important thing is to be fair. Everyone knows the rules, and fights for the points. If you do your best, then I think it’s fair. Everyone fights in 11 matches and the best teams qualifies.
On tomorrow’s match vs Argentina: They are getting better and better each time we face them. They are young and very talented. They have the best setter in world, a good system, a good attack, great defensive players — they are a team that plays well all-around. We have to be consistent and serve well, keeping the ball out of the setters’ hands. Good fundamentals are mandatory for tomorrow.

Cuba coach Orlando Samuells Blackwood: Up until now Cuba has three wins and two losses. As you know we’re a young team, and our purpose is to have a good experience in international competition.
On his player Leon: Leon is young, just 18, and he’s learning now. I’m expecting him to learn more in international competition.
On facing Italy tomorrow: We play Italy, one of best in world. They beat Brazil, and I respect their victory a lot. We will do whatever we can to win tomorrow’s games.

Italy coach Mauro Berruto: I have not so much more to say in addition to the other coaches. Out of the six teams here, five of the six teams that were in Gdansk [FIVB World League Final Round] are here. Serbia wasn’t there, but they are European champions. These are really high-level matches and it will be a great show for the audience. For my team I think these nine points will be the heart of our tournament. The level will be very difficult. Here in Hamamatsu we will face the heart of the tournament.
On scoring system: Generally I think the team who wins should win, and the team that loses should lose. In this tournament I like the idea that you can’t make any small mistakes, you have the same pressure and same attitude from the first to the 11th match. Teams will be more consistent and solid both mentally and physically.

Russia coach Vladimir Alekno: Every team is fighting hard against each other. We’ll see what happens in tomorrow’s game against Serbia. Step-by-step we have to pick up more points starting tomorrow.
On facing Serbia tomorrow: Every game in the World Cup is important. We can’t lose one game. We need to prepare for every match and tomorrow we fight Serbia. We need to prepare well to win.

Serbia coach Igor Kolakovic: Unfortunately we lost any chance for the Olympics in this tournament. But we’re happy to play Russia, Brazil and Italy. It’s important for the young players for experience. I like play against those teams.
On scoring system: I like the system, but I don’t like this tournament. We play 11 games in 15 days without preparation. It’s more difficult than the Olympics. It’s not correct, I think, for the health of the players.
On tomorrow versus Russia: Russia is our big rival. When you play Russia, you need to play with patience and a big heart.

Dutch tragedy in Osijek as Slovenia and Croatia qualify for semifinals