Dutch tragedy in Osijek as Slovenia and Croatia qualify for semifinals

Croatia will be playing Slovenia in the semis scheduled for Friday while Finland will test out the likes of Portugal. Slovenia did not start well but stormed back furiously after losing the opening set to Ukraine. 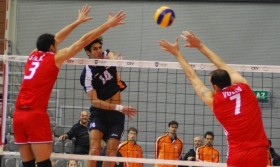 “Our opponents played with courage but it was not enough to surprise us. We just wanted to win” stated Klemen Cebulj at the end of the match. Mitja Gasparini paced Slovenia with 23 points with Cebulj and Flajs also finishing the game in double digits with 15 and 13 respectively. Yuriy Tomin totaled 25 for Ukraine with Andrii Diachkov adding 13 to the count of his side.

The second match of the day turned into a real drama as the Netherlands dissipated a 2:0 lead and were setting the pace also in set 3 by the score of 20:19. However, Igor Omrcen turned the score around (24:20); the “Oranjes” could not capitalize on four match balls in set 4 while Croatia sealed that section of the game by exploiting its third opportunity to go for the 2:2. Croatia quickly went up 12:7 in the tie-break and eventually clipped the final 15-12 and hence a ticket for the semifinals. Omrcen top scored for the home side with 28 points while Niels Klapwijk totaled 31 for the Netherlands.

PHOTO OF THE DAY: Anja Spasojević and...